In the day-to-day minutiae that has become my post-operative diet, I do get the occasional craving for a certain food or meal. I try to stay as vigilant as possible, but I’m not averse to treating myself to something tasty from time to time. This weekend was one of those times, and I blame Jon Favreau. Last week I watched the movie Chef on Netflix, forgetting just how much food porn was involved. If you haven’t seen Chef, you should. It’s totally funny and adorable, and one of my favorite movies of 2014. The soundtrack is pretty swinging, too. But the best part about the movie? The Cubanos. 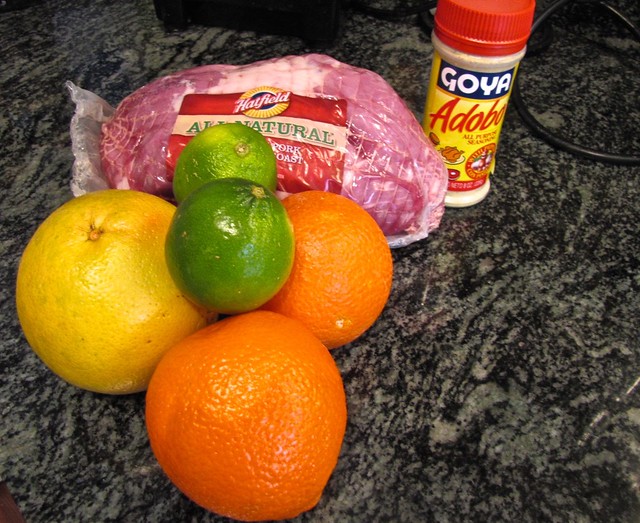 Have you ever had a Cubano? It’s a hot pressed sandwich brought to the states by Cuban immigrants in Florida. It’s a soft fluffy roll, spread with good old yellow mustard and stuffed full with roasted pork, deli ham, swiss cheese, and pickles, and traditionally toasted on a flattop grill, or a plancha. It’s heaven on a bun, and damn it, I wanted one this week. So, while I was avoiding the arctic tundra outside, I set to making Cubano magic this weekend.

We start with a mojo (mo-hoe), or citrus marinade for the pork roast. Zest one grapefruit, two oranges, and two limes, juice all the fruit, and toss it all with the pork roast along with salt, pepper, and olive oil. Allow to marinate for about 25-30 minutes. Truss pork shoulder with string (or do like I didn’t and leave it in the string it comes in, silly goose), sprinkle all over with Goya Adobo seasoning, and spread minced garlic over the top (I honestly prefer the jarred garlic for this). Roast at 400 for an hour and a half to two hours, or until a meat thermometer inserted into the middle of the roast reads 140-145 degrees (or however done you prefer your pork). 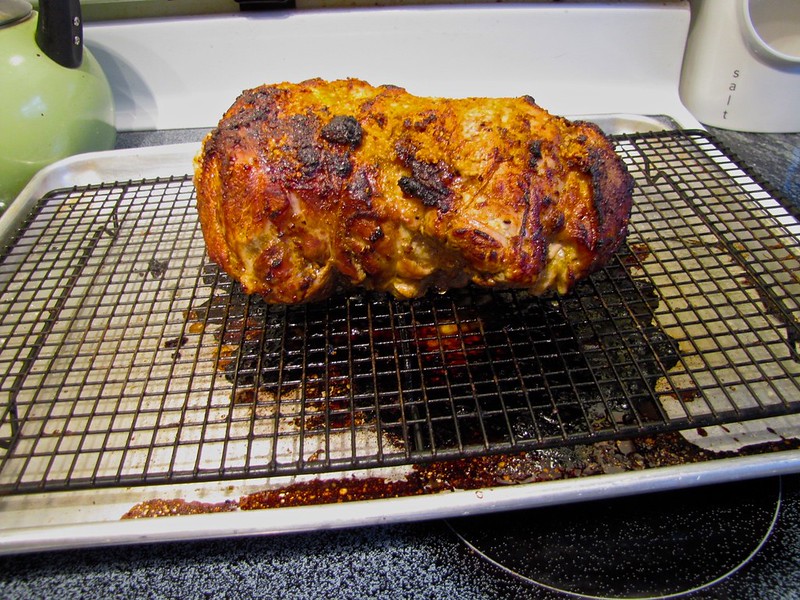 Cover with foil and allow to rest. Slice thinly and set aside. The pork can be made ahead of time – you can even make this as a main dish and use the leftovers when you’re in the mood for Cubano goodness. 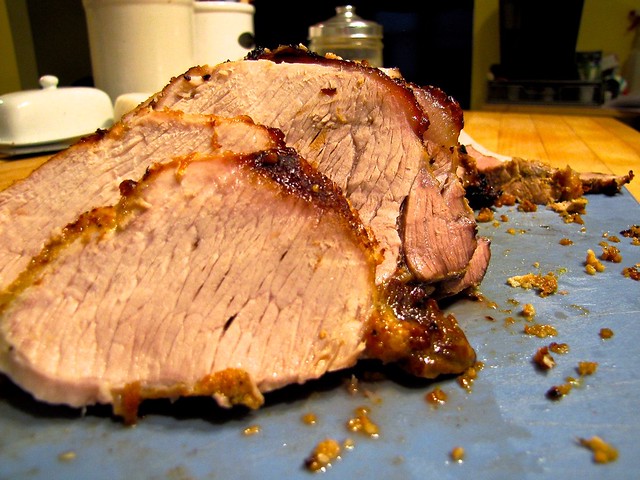 Now, time to make the sandwiches! Grab your other ingredients. 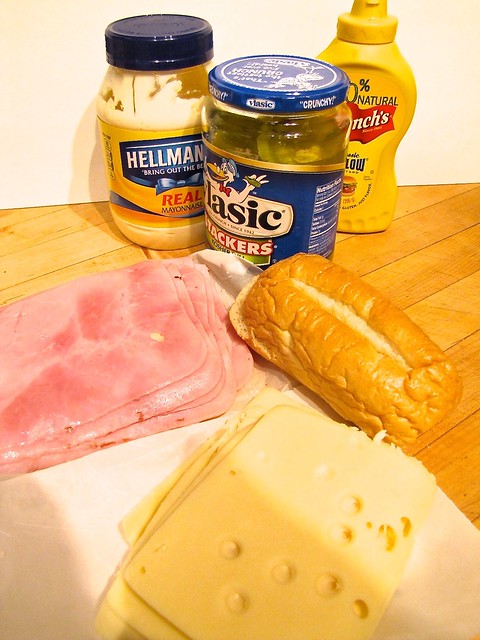 Cubanos assemble! Spread each side of the roll with mayo and mustard, and layer the pork, ham, pickle, and cheese from bottom to top. Top with remaining half of roll. (Note: I heat the roasted pork and ham in a pan slightly before assembling, to make sure the sandwich is warm all the way through.) 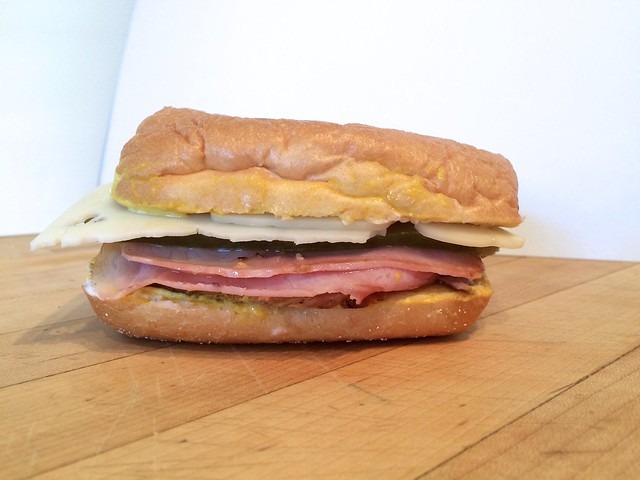 Now, heat up your grill, griddle, or pan. I used my good old panini press. If you have a press with flat plates use that instead. If you don’t have a sandwich press, you can make these between two pans, using a couple large cans to weigh the top pan down. Spread the outside of the sandwich with some softened butter (I KNOW. You can skip this, but your bread might not be as toasty good as one would like.), and press on the grill until the bread is toasted and the cheese is melted and gooey. 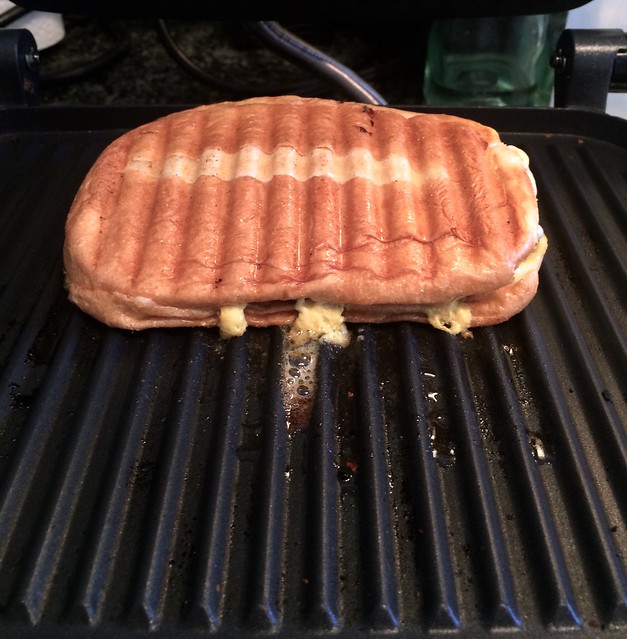 Slice in half and serve your new favorite sandwich. 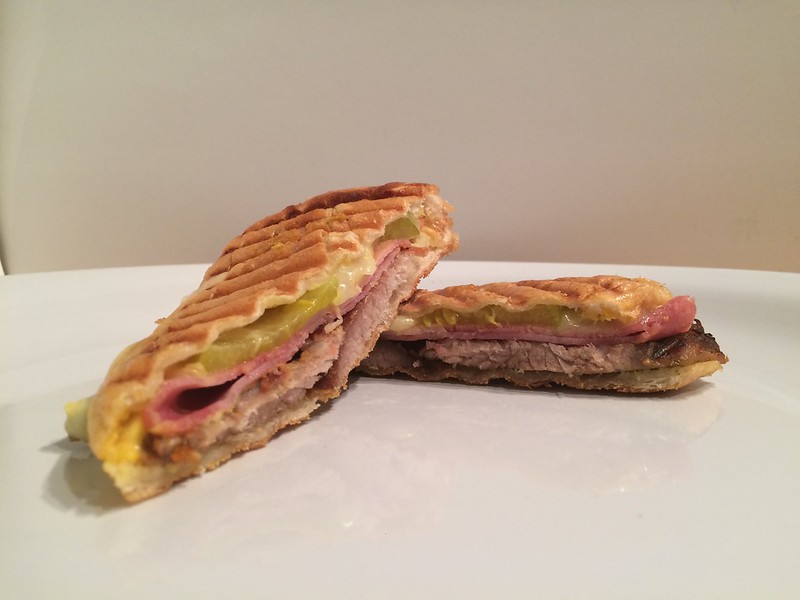 Place pork roast in large bowl. Zest all fruit and set aside. Juice fruit and pour into bowl with pork and toss with zest, olive oil, salt, and pepper. Truss pork and place on roasting pan. Sprinkle Adobo all over roast. Spread minced garlic on top of pork and roast in oven at 400 degrees until a meat thermometer inserted in the middle of the roast reads approximately 140 degrees. Remove from oven, cover with foil, and allow to rest. Slice thinly and set aside.

Heat a slice of pork and ham each in a small pan until warmed through and slightly browned. Spread mayonnaise, then mustard over each half of roll, top bottom half with pork, ham, pickle, and cheese, and top half of roll. Spread softened butter on outside of roll and toast sandwich on a panini press or sandwich grill for 3-5 minutes until the roll is toasted and cheese is melted. Serve immediately.