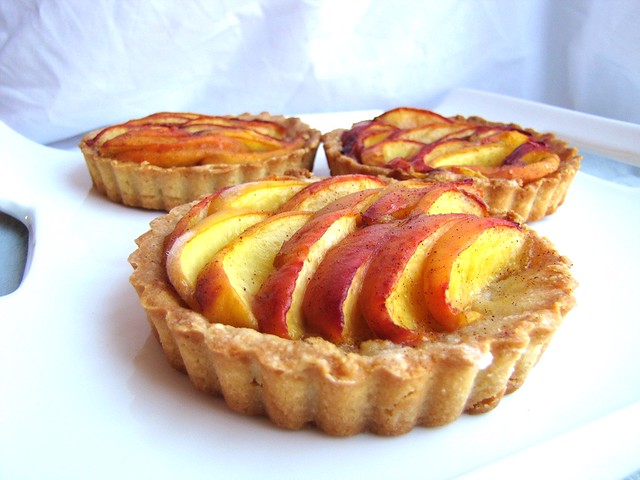 There’s Halloween candy in grocery stores. Autumnal decorations in Target. Pumpkin beers on tap at the local pub, for crying out loud. Hell, I even saw some Christmas lights in Big Lots the other week.

Fall (and Winter) is coming.

School has started in some areas, community pools are closing, and if I’m not mistaken, the air has been a little cooler in the mornings.

But right now it’s still summer, at least for another week or two. And there are still peaches to be had. Sweet, tender, juice-dripping-down-your-chin peaches. My absolute favorite summer fruit. 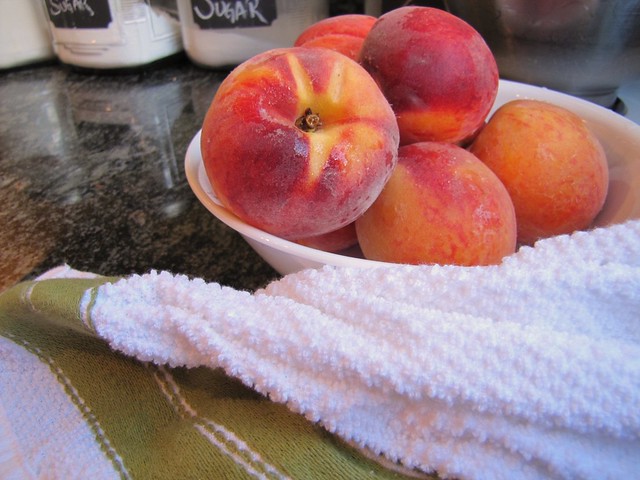 I’ve been wanting to use these tart pans for a while. I love the idea of individual desserts, and peaches are pretty much the perfect fruit for such a vessel. I decided to go with a sweet shortbread-like crust using almond meal instead of the usual pie crust type pastry, just to switch up flavors/textures. I kept the filling very simple, just a little brown sugar and cinnamon, mainly to let the peaches speak for themselves.

Start with the tart crust. You’re going to want to give yourself some time with this, it needs to sit in the fridge a bit.

In the bowl of your mixer, mix butter, almond meal, flour, confectioner’s sugar, egg, vanilla extract, and salt until it comes together. The dough will be very sticky. Turn dough out of bowl onto plastic wrap and allow to rest in refrigerator for at least an hour. 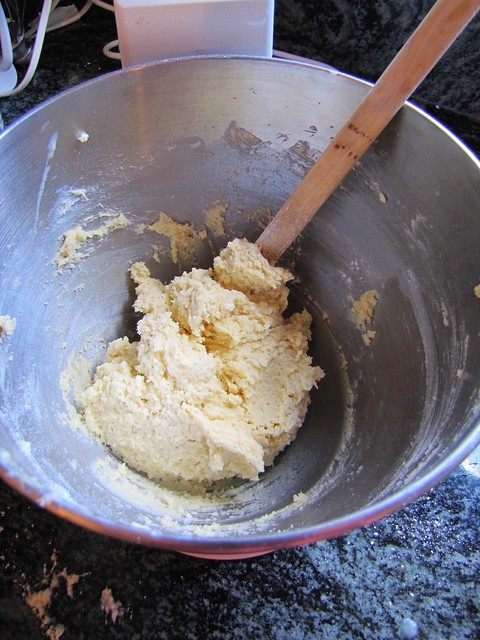 Remove dough from plastic wrap and turn out onto countertop sprinkled with flour (you can use confectioner’s sugar, but be careful, because that’s how you get ants, Lana), and roll out with a rolling pin to approx. 1/4 inch thickness. Use your tart pan to “template” the amount of dough you need per pan – cut around pan and flip/press the dough into it.

(This is the part where I tell you I did not wait at least an hour for my dough to set, it was *incredibly* sticky, and I ended up piecing it into my tart shells because half of it stayed stuck to my counter. Learn from my mistakes.)

Poke dough with a fork all over the bottom of the tart shell, place pans on a rimmed cookie sheet and bake at 350 for 20 minutes, until just lightly browned. 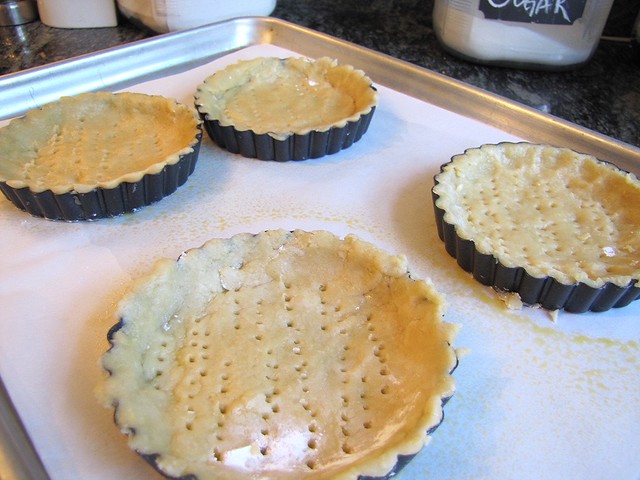 Once shells are baked and have cooled slightly, slice peaches thinly into a bowl (you can peel them if you want, I didn’t. I like the color/texture), sprinkle with brown sugar and cinnamon, and stir. Place peach slices in tart shells and return tarts to the oven for another 15-20 minutes. I was experimenting and squeezed a little bit of honey over the peaches before I put the tarts back in the oven, but as far as I can tell it didn’t really add anything to the tarts. 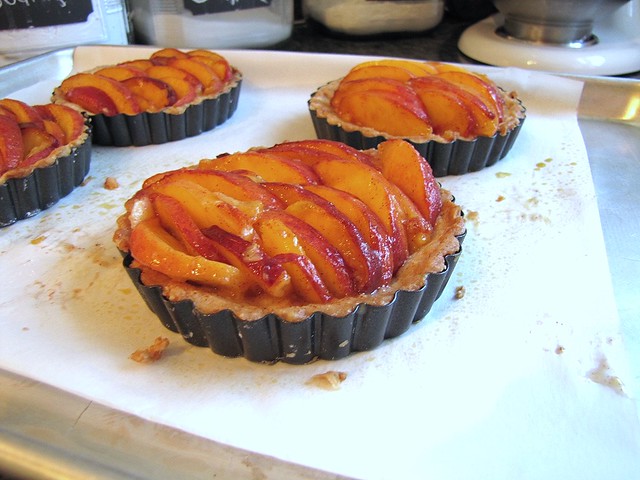 Remove tarts from pans and serve while still warm. 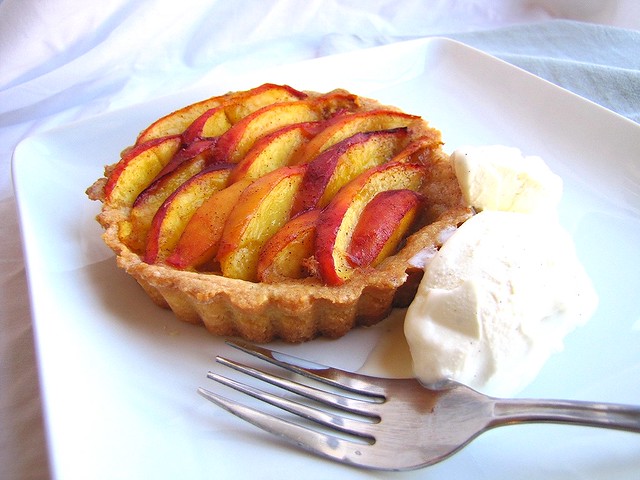 Preferably with some ice cream.

For the crust (adaptation of this version):

Combine all ingredients in bowl and mix together until combined. Turn dough out onto plastic wrap, cover, and allow to rest in the refrigerator for at least an hour. Remove from plastic and roll out on counter sprinkled with flour until about 1/4 inch thickness. Using the tart pan as a template, cut dough around pan and turn over, pressing dough into pan and along the edges to remove excess dough. Poke holes into bottom of dough with a fork. Repeat with remaining tart pans and dough. Place pans on a rimmed cookie sheet and bake at 350 for 20 minutes, until tart shell is slightly browned. Remove from oven and allow to cool slightly. 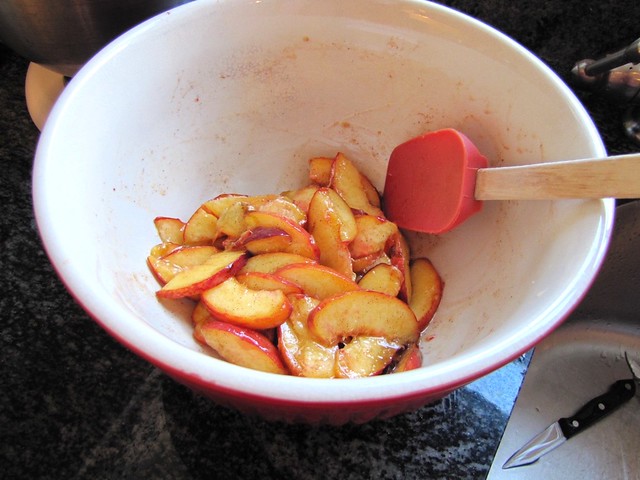 Slice peaches thinly into a bowl. Add brown sugar and cinnamon and combine. Place peaches in tart shells. Bake at 350 for 15-20 minutes, until bubbly. Remove tarts from shells. Serve while still warm. 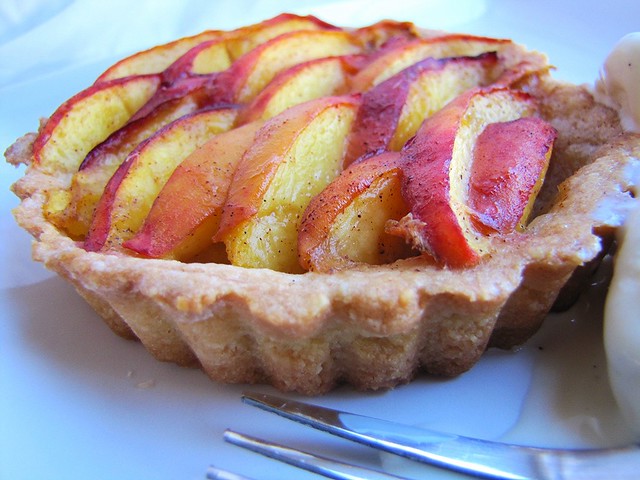 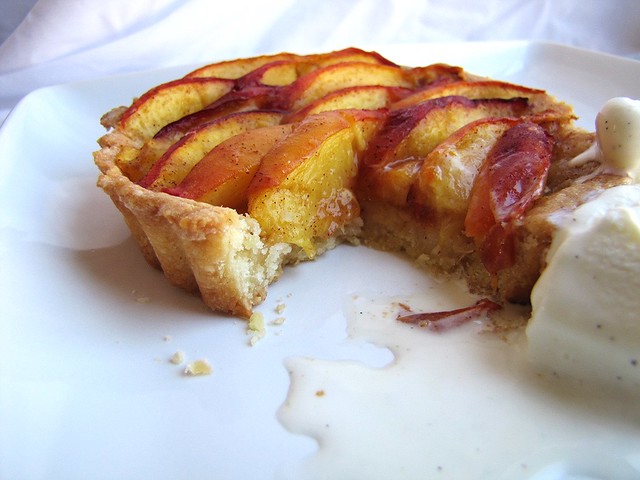 Enjoy your last gasp of summer, guys. I plan to!